This is an excerpt from our white paper Hyperscale Cellular IoT. If you like what you read, the full white paper is available here. Don’t hesitate to contact Enea if you have any questions. Download white paper here.

The vast majority of IoT connections will be short-range devices using radio technologies such as Wi-Fi, Bluetooth, Z-wave, and Zigbee. But, just like most radio technologies for IoT, cellular connectivity will have rapid growth. 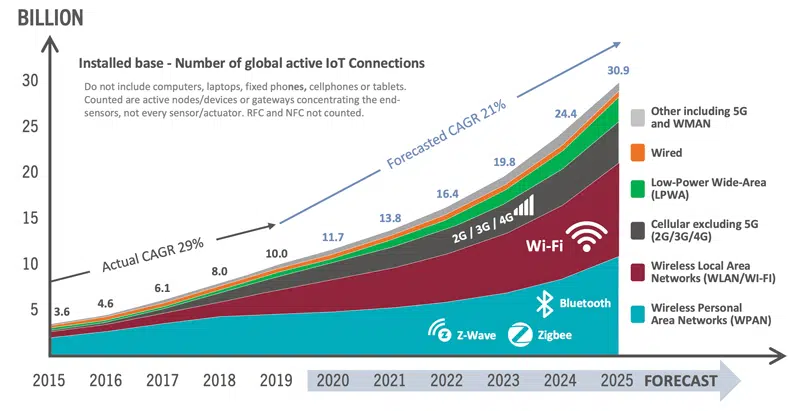 Each technology has its own use case. Cellular is the technology of choice for devices requiring mobility. Short-range technologies such as Wi-Fi are mainly for indoor connectivity. The Low Power Wide Area Networks (LPWAN), including the cellular NB-IoT and technologies such as LoRa, are focused on battery-powered devices with a battery life of up to 10 years.

MANAGEMENT IS KEY FOR IOT
Cellular is the only technology that enables global central management by using the mobile operator’s existing roaming portfolio, typically in 200 or more countries. However, as discussed in our white paper, there are markets where permanent roaming is not a viable option (regulations and/or commercial reasons).

A CLOSER LOOK AT TECHNOLOGIES FOR CELLULAR IOT
Today, many IoT applications are using the existing 4G (LTE) broadband, which has been improved for IoT. In the last few years, 3GPP has created new standards to better support specific use cases. The largest volume of new IoT devices will come in the Massive IoT area designed to support low-cost wearables, sensors, and meters over long distances. 5G provides the ability to support Critical IoT use cases for real-time mission-critical applications such as connected cars and remote surgery. 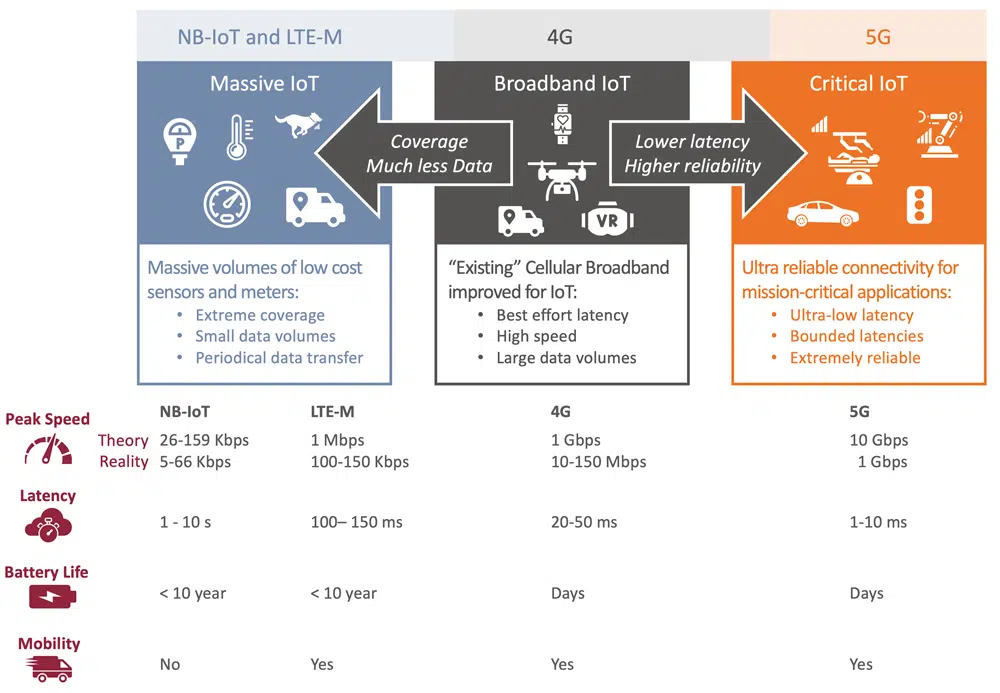 The Massive IoT market segment includes devices that are widely used in our society, mainly different sensors and meters. The NB-IoT and LTE-M technologies are the dominant technologies for Massive IoT. Compared to 4G, they are designed to deliver extreme coverage with much smaller data volumes and mainly periodical transfer of data. This means a battery life of up to 10 years which is ideal for low-cost devices such as smart meters.

NB-IoT is useful for simpler devices that don’t require connected mobility and tolerate low data rates in tens of Kbps and high latency of up to 10 seconds.
For tracking devices where connected mobility is crucial, CAT-M is a better choice. Cat-M also offers support for voice, higher data speeds of up to 1 Mbps and lower latency (100-150 ms). 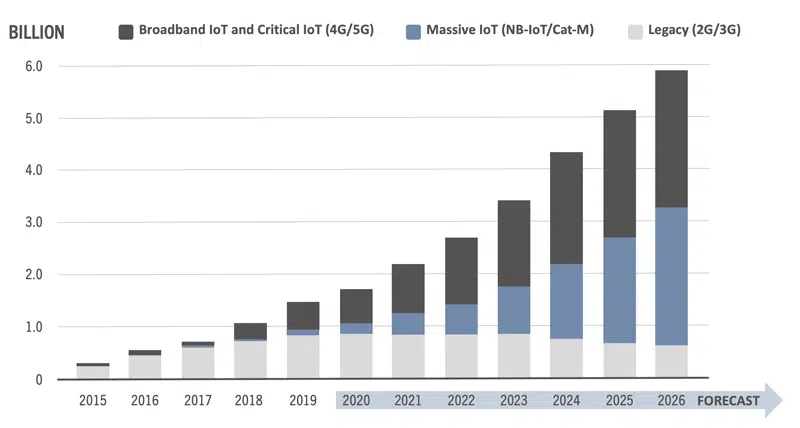 According to the Ericsson Mobility report November 2020, massive IoT (NB-IoT and Cat-M) will have an explosive growth going from almost 200 million connected devices in 2020 to approximately 2.6 billion or 45% of all cellular IoT connections by the end of 2026. At the same time, the total number of cellular IoT devices will be approximately 5.9 billion and 44 percent of those will use broadband IoT and Critical IoT (first devices expected in 2021), with 4G connecting most devices.

The non-cellular long range technology low-power wide-area network (LPWAN) will, according to the same report, go from 200 million to 400 million between 2020-2026.

Visit website
We use cookies on our website to give you the most relevant experience by remembering your preferences and repeat visits. By clicking “Accept All”, you consent to the use of ALL the cookies. However, you may visit "Cookie Settings" to provide a controlled consent.
Cookie SettingsAccept All
Manage consent