This is an excerpt from our white paper Wi-Fi in the 5G Era – Strategy Guide for Operators. The full white paper is available here if you like what you read. Don’t hesitate to contact us if you have any questions.

OFFLOAD TRAFFIC WILL ONLY INCREASE 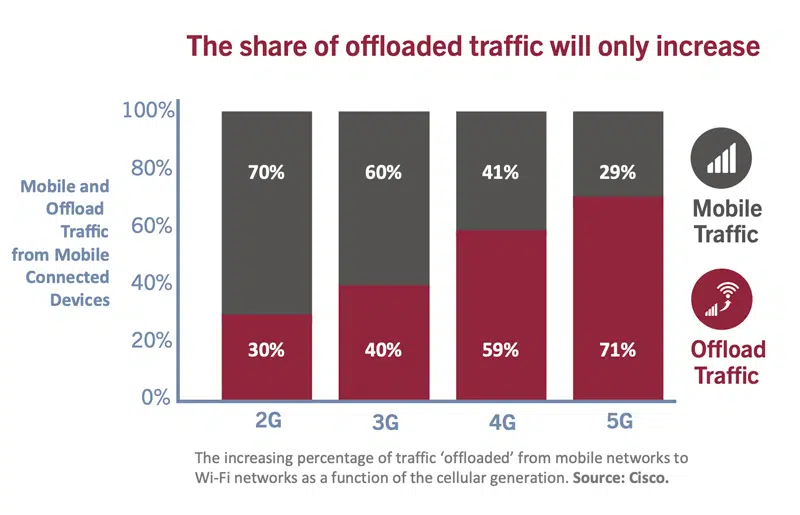 Rapid evolution and availability of new technology and new spectrum are making carrier Wi-Fi inevitable as a strategic technology of choice for service providers everywhere. The idea that Wi-Fi is the dominant indoor wireless technology is not new. But we believe that Wi-Fi’s dominance will be even more pronounced in the 5G era.

It is well known that device data consumption continues to rise particularly as the result of the increased popular demand for video streaming and – more recently perhaps – the explosive demand for collaborative work applications, such as video conferencing. More than this, research suggests (see figure) that the need for mobile networks to ‘offload’ traffic to Wi-Fi will substantially increase in the 5G era.

In some countries – such as the UK, Japan, and Germany – ‘Wi-Fi offload’ percentages (meaning the percentage of smartphone traffic delivered over Wi-Fi networks of any kind) are already well above 80%. In connection with the US decision to allocate all of the 6 GHz band to Wi-Fi, the FCC cited the need for offload from 5G networks as an important contributing factor in their decision. 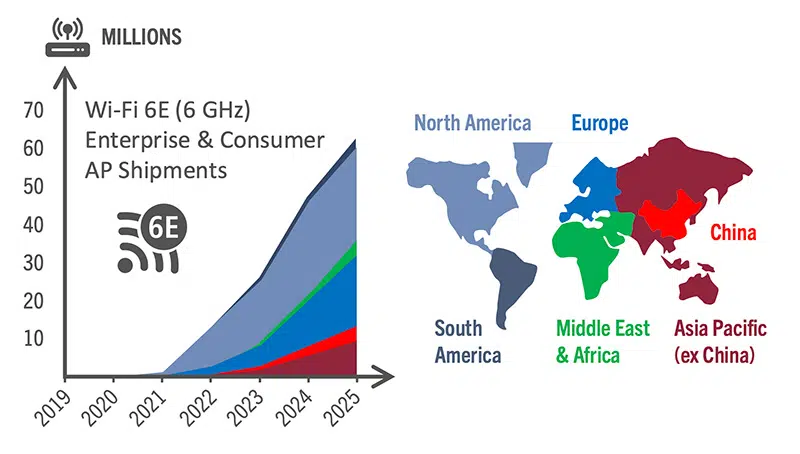 Most analysts believe Wi-Fi 6 and Wi-Fi 6E technology will be ramped up quickly and indeed faster than previous generations of Wi-Fi, specifically because work-from-home connectivity today is business critical for ISPs and consumers. Such factors will continue to play important roles as drivers of renewed connectivity demand as will the continued growth in number of devices in the home as well as data consumption.

The next phase in the ramp-up and deployment of new Wi-Fi technology will then be enterprise and carrier-grade APs and supporting systems. This evolution will happen a little later but also in parallel with the mass-market deployment of home Wi-Fi 6 and Wi-Fi 6E gateways and systems.

In general, the IEEE 802.11 standardization working group is now aiming for a Wi-Fi technology renewal cycle of five years, which means full market penetration of Wi-Fi 6 and Wi-Fi 6E into the enterprise and service provider Wi-Fi markets will sharply rise and come to completion around 2025-26. 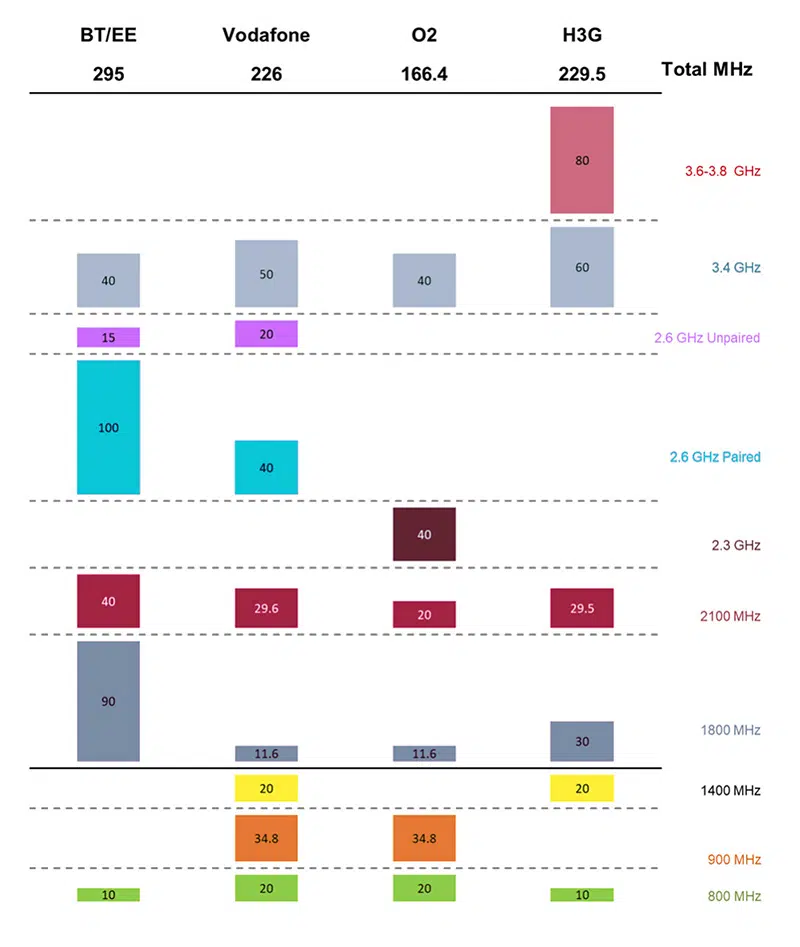 Meanwhile it is critical to understand that the availability of pristine new unlicensed spectrum has made the case for carrier Wi-Fi hugely more compelling. Have a look – for example – at the graphic picturing the total licensed spectrum holdings for mobile operators. The analysis uses the UK as an example.

The most amount of licensed spectrum is held by BT and totals 295 MHz while H3G is in second place totaling 229.5 MHz. None of the UK’s mobile operators hold more than 300 MHz of total licensed spectrum – and most hold much less.

The UK recently released 500 MHz of pristine – meaning unused by legacy Wi-Fi – unlicensed spectrum in the lower 6 GHz band. That slice of Wi-Fi spectrum alone is around double the amount of licensed band that most UK mobile operators hold at this time. Add to this the existing 5 GHz and 2.4 GHz Wi-Fi bands – and we contend that it is becoming increasingly difficult for operators to reject the strategic use of carrier Wi-Fi services. Mobile and fixed operators need to embrace carrier Wi-Fi today to stay competitive.

In countries where the full 1.2 GHz of 6 GHz spectrum (up to 7.2 GHz) has been released – including the US, Korea, Brazil, Saudi Arabia, and the Republic of Chile thus far – the situation is even more extreme. The total amount of unlicensed spectrum available (some of it available for outdoor use as well) could be up to 10 times as much as the licensed spectrum holdings of a single mobile operator.

Visit website
We use cookies on our website to give you the most relevant experience by remembering your preferences and repeat visits. By clicking “Accept All”, you consent to the use of ALL the cookies. However, you may visit "Cookie Settings" to provide a controlled consent.
Cookie SettingsAccept All
Manage consent